Tree hanging on by a thread? We’ll handle it!

Dan The Wood Man is a locally-owned and operated tree removal, junk removal and small demolitions expert serving homes and businesses throughout Muskoka and Simcoe County. Donald Cooper is a “thought leader” and Certified Speaking Professional who, in a lesson on marketing and profitability, summed up what Dan McIntee and his crew at Dan The Wood Man are all about:

How Dan Was Dubbed: “The Dangerous Tree Man”
Donald was looking for someone to remove a dying tree that was partially hanging over both his workshop and a neighbour’s cottage. Both agreed that it had to go! Several tree removal experts in the area refused to do the job, saying it was too dangerous. Well, it was no match for Dan:

“He came over the next day, looked at the situation, agreed that it was dangerous and described exactly how he was going to go about it. He had to bring in a gigantic rented crane to lift each section of the tree safely away from the power lines and building once he had climbed up and cut it. He told me how much it was going to cost, and then softened the blow by adding that the good news was that we wouldn’t be running out of firewood anytime soon.

At that point I realized that Dan’s ability and willingness to take on the work that everyone else couldn’t or wouldn’t even attempt…it was never about price. By being the best at what he does in this market and then positioning himself as “the dangerous tree man,” he had removed himself from the low end, commodity work. Dan picks his jobs, names his price, shows up and gets it done! He loves the challenge, the “celebrity status” and the higher incomes that go with it.”
- Donald Cooper

So there you have it! At Dan The Wood Man, we are all about providing our clients with friendly and courteous service with keen attention to detail. Every job we do is performed in a timely manner and at a reasonable cost to exceed your expectations!

See the Dan The Wood Man difference for yourself. Get in touch with us today for a free quote! 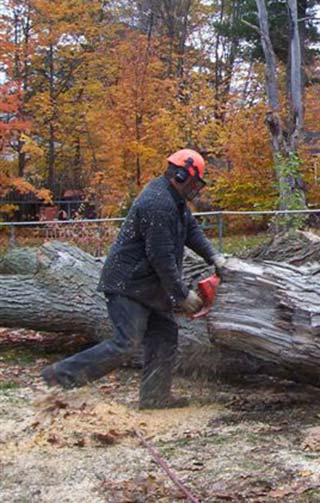